Relay games for kids provide a great way for groups of kids to work together to accomplish a goal. They can be used as a way to break the ice when children don't know each other well and can be a fun pastime for a number of occasions. It doesn't take much to put together fun and creative relay races for kids, so check out these ideas to get started!

If you need a team-building relay race or a unique relay for a sports day, "Dribble, Pass, Shoot" is perfect. The game works best on a basketball court, but if you can't access one, you can use laundry baskets or some other large vessel for kids to shoot basketballs into. You'll need at least eight kids to participate in this relay that features soccer, basketball, and teamwork skills.

This relay game for kids is played indoors on a gym floor and includes four teams. If you have smaller or larger group, you can remove or add bowling pins to accommodate more or fewer groups.

Kids of any age can try this challenging relay that can be played inside or outside. For the best results, provide boots or hip waders that are large enough to fit over kids' feet with their shoes still on. You could also substitute in any footwear that would make running difficult like toy Moon Shoes.

Incorporate a bit of science into your relay race when kids harness the power of static electricity. This relay race works best indoors on a carpeted surface, but can be played anywhere. Even preschoolers and kindergarteners can play this simple version of a classic balloon relay. 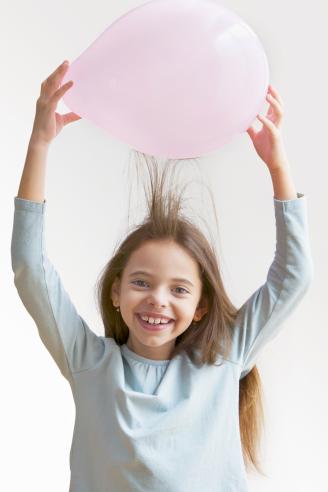 Older kids who are able to throw flying disks with some accuracy can participate in this outdoor game. You can play a similar game with younger kids using flatter flying disks or even plush balls.

This game is very simple to set up and play. Give each team a lemon and a pencil. The participants use the pencil to push the lemon through a racecourse and back to the beginning. Then the next person on the team takes a turn pushing the lemon through the course.

Although there are teams in a standard Dodgeball game, each player is essentially on her own to throw, avoid, and catch balls. This team version allows players to use each other as a giant shield and coordinate their throws. 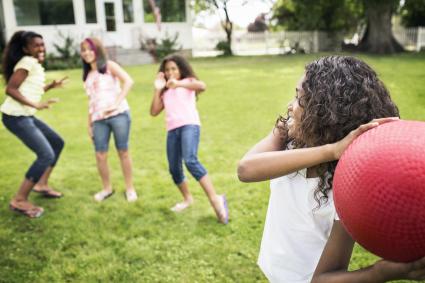 Toddlers and preschoolers can play this easy game at home or daycare. Add a level of difficulty for older kids by having them search for particular words instead of images.

Make Your Own Pizza Relay

You can do this yummy relay with any food that requires multiple steps. Although younger kids can participate, it's best for older kids and tweens. You can do this with one team as a non-competitive relay race or, if you have more prep space, you can have two or three teams play.

With a little imagination, you can turn almost any classic kids' game or activity into a group relay race.

Turn a game of Simon Says into a fun relay when you split your group into equal teams. Assign each player a number so there is a Number One, Number Two, etc. on each team. Start with all Number One's playing a regular game of Simon Says where you call out actions. You can randomly call out directives to switch teammates by saying something like "Simon says switch with Number Four." If someone gets out, the next number on their team jumps into the game. The person that is out must sit out for the rest of the game unless their number is called back in by "Simon." The team with the last player standing in the game is the winner.

Separate your group into equal teams to play Freeze Tag or any other version of Tag. You'll also need to choose one person to be "It." Start with one player from each team running around trying to avoid getting tagged by "It." If a player gets tagged, one of their teammates joins the game and is the only person who can "unfreeze" them. Once "unfrozen," both players stay in the game. As more players from each team join the game, they can only "unfreeze" players from their own team. The team with the least players in the game at the end wins because it means their teammates got tagged the least!

Think of this as a giant game of Duck, Duck, Goose! Separate your group into equal teams. Count off each team by ones. Have each team sit in their own circle in the playing area with each player holding up the number of fingers that represents their number. Go around all the circles saying "Duck" or "Relay" as you tap each child's head. When you say "Relay" also shout out the number that corresponds to the player you have touched. All children from all teams with that number must run around the outside of all the groups then head back to their original seat. Anyone who gets tagged by you is out. The last team with players left in the game wins. 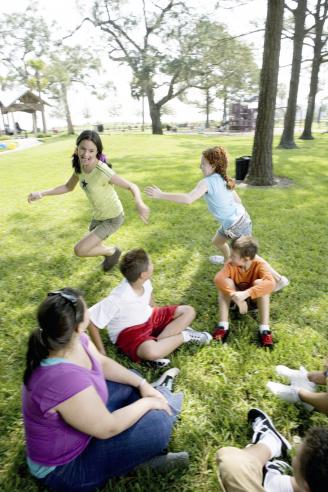 All relay races are run in a similar manner and follow the same basic rules. Make sure everyone understands how to play and that teams are evenly matched so kids can focus on having fun.