Children are naturally interested in astronomy, especially the celestial bodies that appear with unfailing regularity. Printable star charts, which are pictorial representations of the night sky, can come in handy while introducing stars and constellations to children. In essence, star charts for kids are like a map, so it helps children identify the stars.

What Do You See on a Printable Star Chart?

A star chart lets you see the whole starry sky at a glance. It allows you to relate positions of constellations with each other and can help you identify common stars and constellations. Depending on the detail, it may also help you see other celestial bodies in the night sky.

Brightness of the Stars

The stars are depicted in the star chart as different-sized dots, their size depending on how bright they appear in the sky, (not how large they are). The size of the dot on a star chart corresponds to the brightness of the star only. A star that is smaller than the others around it may appear brighter in comparison if it is closer to earth. A giant star may be just a tiny dot in the chart if it looks small in the sky due to its greater distance from our planet. Children should be made aware of this fact.

Constellations and Position of Stars

Star charts may show groups of stars as constellations too, marking their outlines with dots representing the stars, and with lines connecting them. However, children should be taught that the constellations are not natural groupings occurring in nature, but rather were identified as groups by ancient astronomers. They gave names to these groups according to the shapes of objects they seemed to resemble. It may take quite a bit of imagination to relate the outlines of the constellations to the shapes they are supposed to represent. When learning about constellations for kids, printables like a star wheel or chart can be helpful.

Tips on Using a Star Chart

While star charts are not difficult to use, there are a few tricks to the trade that will help you and your child identify the most constellations. Using a constellations map for kids such as a star wheel can be a helpful visual tool.

To use the printable star wheel, or planisphere, below, you will need Adobe Reader. Click on the chart to view the star wheel, download it and print it. If you run into any problems printing the chart, the Adobe Guide can help. There is both a wheel for the northern and southern hemisphere. Note that the sky is going to be distorted the further away you are from the latitude noted on the chart, however, it should be close enough to follow throughout most of the northern and southern hemispheres, respectively. 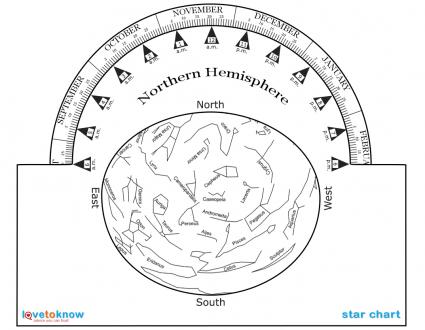 Kids can enjoy countless nights of fun simply staring at the night sky or looking for constellations with their star chart. However, you can also use it as an educational tool at home, for school family nights, at summer camps, and space camps. Kids under age nine will need more help using the chart and with these constellation activities. Kids ages ten and up can use their skills in following directions to figure it out on their own.

If you look at the different star wheels, you'll see that the same constellation is closer to a different month or date on each one. Kids can spot these differences in an individual activity or as a competition with others.

The star wheel chart tracks the night sky from 6 p.m. to 6 a.m. on any given day and kids can track it too.

What I See Star Wheel

Kids create their own star wheel using their imagination and the sky above in this creative activity.

Most constellations on a star chart contain straight lines. Follow the end line of a constellation then go past it with your eyes to see if you can bump into the next one that extends from that line.

Most kids love a little competition and it's easy to turn star gazing into an educational relay. You can play this game with your family or any size group of kids.

What Time Is It Mr. Sky?

Challenge older kids to deduce what time you're thinking of based on clues given about what you see in the night sky.

Benefits of Star Gazing for Children

It is exciting for children to learn the names of the prominent stars in the sky and to be able to identify them. Once they learn to locate the different constellations, they can compare their relative sizes by measuring the angular distance from earth and learn to identify the cardinal directions as ancient mariners did before the invention of the compass. They can also see how different months get Zodiac signs assigned to them. A couple of great lessons on stargazing can be a lifelong memory that demystifies the night sky and brings kids closer to nature. Stargazing is a wonderful family activity that everyone can enjoy.