Power Rangers started as a kids' television program in the early 1990s, gained speed with popular toys and maintained popularity by reinventing the show each year. From Mighty Morphin to Beast Morphers, there is no end in sight for these iconic characters and the accompanying Power Ranger toys.

Any kid who wants to be a Power Ranger can get started by playing with basic action figures from any of the franchise's series.

When your child is playing Power Rangers at home, they'll want to have the rangers and zords, but they'll also needs villains to defeat. The Super Ninja Steel Cockpit Mode action figure line includes both rangers and villains from the show. Each figure is posable and comes with up to two battle gear items. Prices start around $10 and go up to about $30 depending on the armor type. Available villains include Galvanax and Mangetsu on Amazon. 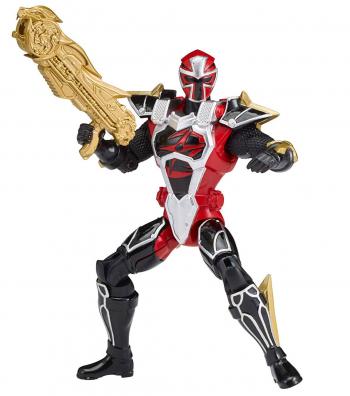 Each Power Rangers show has a theme, and each ranger has his or her own unique weapons. You can find toy guns and swords that resemble those from the shows in almost any toy section. Many kids like the Power Ranger toys weapons to help act out scenes from the shows.

If your kid is a fan of the Ninja Steel series, this Ninja Training Gear set will make them feel like one of the rangers. For less than $9 at Walmart, the set comes with a nightstick that resembles a sword and a dragon claw that features a grip handle. Both weapons are black and silver with red accents.

The Gold Ranger's Ptera Saber from the Dino Charge series looks just like the real thing for kids who want to feel the action of a ranger battle. The 13-inch sword is made of blue plastic with gold, red, and silver accents and costs about $10.

Zords are the animatronic vehicles the rangers often travel in when heading to a fight. These smaller zords can then combine to form a powerful Megazord.

When playing with a zord kids want it to feel as large in real life as it does on the shows. The Power Rangers Green Ranger & Dragonzord Rc is about as close as a kid can get to the real thing. This remote control zord will set you back about $80, but it brings the characters to life. Inspired by the original Mighty Morphin Power Rangers this set includes a tiny green ranger action figure and 16-inch tall dragonzord. The remote control vehicle moves forward, backward, and spins to whip his tail. It also launches five mini missiles, lights up, and includes sounds. 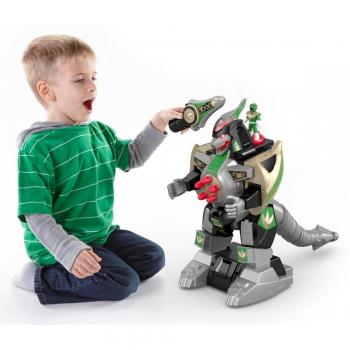 If your child wants to feel like a real ranger, you don't need to buy a full costume to give them the look of one. Role play items include chest plates, gloves, and the different kinds of morphers that turn the rangers from ordinary teens into fighting machines.

Deluxe Ranger Dress Up Set with Light Up Chest Armor

Kids who want to become a Power Ranger can get that feeling with the Deluxe Ranger Dress Up Set with Light Up Chest Armor. The separate shirt and chest plate are detailed to look just like the top of a ranger's suit and fit sizes 4 to 7X. For $20 you can choose from pink, blue, black, or yellow. The center of the chest plate lights up with the push of a small button thanks to the included battery.

Your child can morph like a real ranger with the Power Rangers Movie Power Morpher that includes five power coins. Inspired by the 2017 movie, Power Rangers, this large gray morpher clips onto your child's belt. Kids then insert one of the power coins and slide the switch to hear morphing sounds and see it light up. For about $15 it includes power coins for the tyrannosaurus, mastodon, pterodactyl, triceratops, and saber-toothed tiger. It comes with two AAA batteries.

Kids as young as toddlers can start to explore the world of Power Rangers with sets that include the ranger's hideout and zords along with a few action figures.

Fisher Price's Imaginext series of toys are made for preschool kids and each set is compatible with others even if the characters aren't from the same show. This $15 Imaginext Power Rangers Megazord and Titanus set includes a 4-inch tall Saban's Power Rangers Megazord figure and the zord, or vehicle, called Titanus. Titanus is a large white brachiosaurus with the capacity to shoot one small, rounded dart at a time. Kids can place the Megazord into position on Titanus' back and push down to launch the projectiles.

Every Power Rangers series includes a secret hideout where the rangers get their missions and plan their attacks. The Imaginext Command Center brings this secret hideout to kids as they play with their other Imaginext ranger characters. For under $40 the set includes the large Command Center playset, an Alpha 5 figure, a Blue Power Ranger figure with 2 weapons, and 3 projectile launchers. Action figures can strap in their harnesses and practice for battle, reveal a hidden cannon that actually shoots, and put bad guys in the jail. The large image of the rangers' mentor Zordon also lights up and tells the rangers their missions. 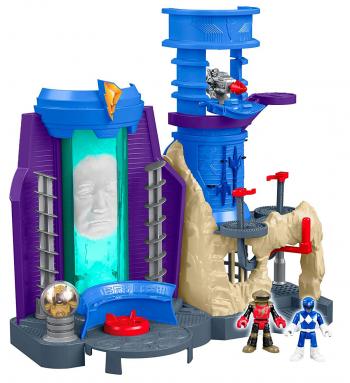 Developed as a superhero television show to appeal to young boys, the series gained momentum over the years by adapting the characters and storylines to prevent the franchise from getting stale. Of course, a new theme and title every year made it necessary to develop new Power Ranger toys as well.

The show was based on a Japanese superhero series and was adapted to American audiences by casting English-speaking actors and using the original Japanese footage for the costumed characters. Beginning with Mighty Morphin Power Rangers, which aired on Fox for three seasons (beginning in 1993), and continuing through to the upcoming 2019 Beast Morphers series, the Ranger franchise has experienced great success. Many seasons of the different Power Rangers series are available on Netflix. New episodes can be watched on Nickelodeon.

Power Rangers toys are another form of superhero toy boys and girls can role-play with. If your child is ready to morph from average kid to epic hero, these Ranger toys can help them get there. Parents should be aware that these toys typically include weapons such as guns and swords.