Phonics game ideas make learning letter sounds fun and exciting for kids. You can use phonics games to teach the relationship between letters and sounds, help kids understand phonics, or to review phonics skills kids have already mastered. Since your aim is educational fun, look for games that are competitive but don't have a singular winner.

Modify the classic pencil-and-paper game Dots and Boxes by adding letter sound recognition. The game is made for two players who can write their letters, but you can have up to four players on one board or use multiple game boards.

Take your classic Tic Tac Toe game to the next level when you introduce digraphs and blends. Forget the Xs and Os, in this game two kids ages four and up will be writing in letters.

Kids in preschool and kindergarten can play this simple talking game to reinforce the differences between long and short vowel sounds. You can make the game more challenging for advanced students by including all the vowels instead of focusing on just one.

Kids in kindergarten and first grade who are actively working on making words can play this fun spelling game. This can be an individual game if you time your child or a group game with points.

Kids need to work together to show how many syllables are in a word without ever speaking to each other in this loud game. This game is best for kids in first grade and up who are learning about syllables and can read complex words. 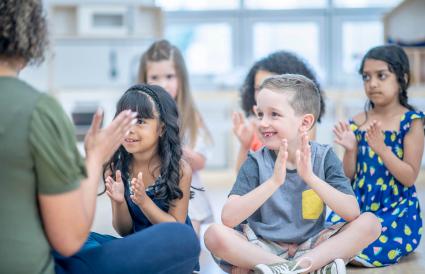 Use vowel digraphs, consonant digraphs, or both for this active phonics game with a Scrabble element. You'll need at least four players in grades one and up, but the more players the better.

Have fun with consonant blends in this game of Musical Chairs meets Tag. You'll need a large group of kids ages six and older to play.

You can play this active game in a classroom, gymnasium, or large room in your house. Kids in kindergarten who are mastering sight words will need to pay close attention and use strategy to win this game.

Free, printable phonics games and activities are perfect when you're short on planning time. You can also find creative ways to use free phonics worksheets as games when you time children or have them compete to finish first.

Have Fun With Phonics

Covering all that's involved in phonics from letter sounds to teaching sight words can be overwhelming for kids. Take some time during your lessons to play fun phonics games to make the concept more appealing to children. Combine these original phonics games with simple phonics activities in your phonics lesson plans for an exciting and comprehensive study unit.