Outdoor games for children can range from group activities, to family time, to sports, to individual exploration. According to Kids Health, the number of overweight children in the United States has doubled since the 1970s. People are spending less time outdoors, and obesity in children is growing at an alarming rate, so getting your kids outdoors and moving may require some creative ideas on your part.

The long lazy days of summer (and winter, spring and fall) just call out to children for some fun games from yesteryear. Today's children may not be aware of the many games they can play with other children in the neighborhood, siblings or cousins. Here are a few they can try:

Red Rover is good for any age. In fact, the larger the group, the better. Have two teams line up facing one another with each team holding hands. One team calls, "Red rover, red rover, send (someone's name) right over," and that child from the other team runs and tries to break through hands. If the child breaks the chain, he or she gets to pick a player from the opposing team and return to his or her own side. If she does not break the chain, then the child must remain with the new team. One team wins when it has the majority of players. Children need to be of roughly the same size and strength to avoid injury.

Older kids will enjoy the classic team game, capture the flag, in which they each try to steal the carefully guarded pennant of the other team.

Young children enjoy the rambunctious circle game duck, duck, goose, which has kids chasing one another tag-style around the outside of a circle.

Four square is a four-player game that uses a basic 10-inch playground ball. Draw a 10-ft square on the ground with chalk, and divide it into four smaller equal squares. The four squares are known as the king, queen, jack and peasant. Each player is assigned to a square. The king serves the ball to any of the squares. The receiving player must hit the ball back either while it is still in the air or after only one bounce. Each player continues hitting the ball back and forth until a player misses. When a player misses returning the ball, the player who missed goes to the peasant's spot, and every other player moves to another space. The object of the game is to get to the king's square and remain there for a long time.

Each player gets a hula hoop. Players swing the hula hoop on their hips simultaneously to see who can sustain the hoop the longest. Every time a player drops the hoop, she is out. The winner keeps the hula hoop going the longest.

Try these other classic games, as well:

Allow children to make up stories and games of their own as well. Let the neighborhood children meet at your house to write and produce a play and then invite their parents to come see what the children have worked on. Let the kids come up with an impromptu band, using common outside objects as instruments. There are as many ideas as there are unique items.

Tag is a classic chasing game. You can play it any size group with players of all ages. Tag has many variations. 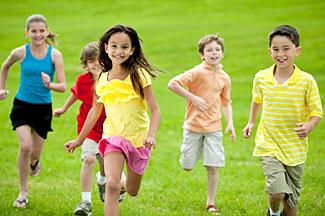 Sports serve as wonderful outdoor games for kids. Whether an organized team sport or an impromptu game in the back yard, kids love games such as:

Even just running through the sprinklers on a hot summer day can be a great form of exercise and fun.

These seasonal outdoor games make the most of whatever weather and holiday it may be.

Make a game out of Halloween decorating. Hold a pumpkin decorating contest for your kids and their friends or for the whole family. Younger kids can paint or use markers on their pumpkins. Older kids may be able to carve pumpkin designs with supervision. Reward prizes for the most interesting works of art.

Hold a scavenger hunt for Halloween candy, with the main prize being a special candy surprise. All participants will get some candy as they hunt. For older kids, incorporate riddle clues to make it more fun and challenging.

If there is enough snow, the kids can make an igloo fort, and they can also make some type of snow fortress. One group of kids is the general and in charge of the soldiers, and they hold the fort. The other group of kids tries to take over the fort. Snowball battles determine who gets the fort.

Need help clearing away spring's first weeds to make room for your garden? Have a weeding treasure hunt. Hide a treasure or multiple treasures among the area that needs weeding. Kids pull up weeds while hunting for the treasures. Everyone can also get a prize, but the winner who pulls up the most weeds first get the largest prize. Snowman Contest: After a big snow, kids can make snowmen. Hold a snowman contest and judge winners based on biggest, smallest, prettiest, funniest and most creative snowmen.

Playing outdoor games with your kids can be fun and create memories that your family will always treasure. Outdoor games don't always require a lot of time, players or fancy equipment. Just about any time, you can take some time to throw around a football, fly a kite with the kids or build a snowman, depending on the weather. Take some time to enjoy the great outdoors with your loved ones.

0
Comments
© 2006-2020 LoveToKnow, Corp., except where otherwise noted. All Rights Reserved.
Resources, Advice & Tips for Covid-19
Read More
Games for Children to Play Outside