You'll see Korean school uniforms on kids from elementary to high school. The Korean high school uniforms, as well as middle and elementary unifroms, differ by region, school and class level, and people in the community recognize which school a student attends by the uniform she or he wears. Explore the different uniforms of North and South Korea along with a bit of history.

A girl's typical uniform includes a pleated skirt, long dress trousers, a white shirt with sleeves and a collar, a vest, a tie and outerwear for the winter. Socks must be white. Make-up and nail polish are typically restricted.

A boy's Korean school uniform generally consists of dress trousers, a white shirt with sleeves and a collar, a jacket, a vest, a tie and outerwear for winter. Socks must be white, and belts must be worn with trousers. 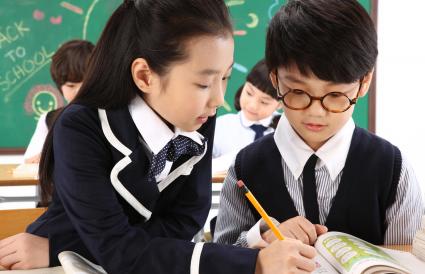 Students are required to wear a uniform to school daily, and the cost can vary by region. However, overall the cost for a girl's school uniform is about $400 with extras, according to Korea Today. The cost of a boy's uniform is about $200. Schools state to parents that overall a uniform and shirts will cost about $300.

In North Korea, uniforms work to designate the job. Therefore, students from elementary to high school and even college will wear a designated uniform. The uniforms can vary by the region but will typically have the same basic components. Additionally, the color schemes are generally black, navy, white and red.

In North Korea, girls wear dresses or skirts. These might include a white collared shirt, pleated skirt and blazers. Most schools require a solid neck scarf typically in red to show political support of the Korean party. Some schools also have caps for girls as well. Younger girls might have a jumper rather than a skirt.

The boy's uniforms in North Korea match closely to that of their neighbor. Boys wear slacks, white collared shirts, blazers and sometimes caps. Like the girls, boys will also have a solid red scarf.

There are also a number of negative effects that school uniforms can bring like:

History of School Uniforms in Korea

The idea of school uniforms before the 1900s came from the hanbok, which was a traditional style of clothing worn during the Joseon Dynasty. However, during the early 1900s, the school uniform became more westernized. The shirts shortened and the boy's uniforms became more like the worker uniform. The uniforms today are very similar to those found in Western cultures; however, schools have taken a more individualized approach, making their unique uniforms stand out.

Uniforms have a long history in both North and South Korea. Not only do they make the student body uniform, but they can even show patriotic pride. Many Korean school uniforms have even become fashion accessories.