There are plenty of kid pirate games that will liven up any pirate themed kids' party or play group. Pirate games for kids are easy to create with a few supplies and a little creativity. Here are a few ideas that are sure to make your pirate party more adventurous!

Every great pirate needs a nautical name and every party guest gets one in this fun game! 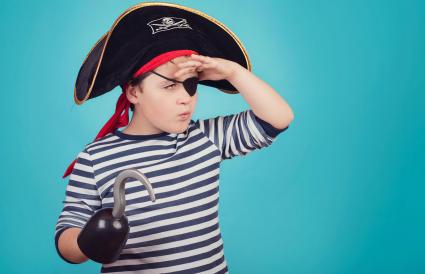 Kids will use their hand-eye coordination and fine motor skills to pick up pirate eye patches with their hook hand.

Each child will need to help make a hook hand pirate craft using a disposable cup and tin foil. You'll also need to scatter a bunch of costume eye patches around the room. If you can hang the eye patches from low branches outside or on furniture inside, it will make the game easier.

Learn to dress like a pirate in this fun team game! If you want everyone to end up in costume, hold several rounds of the game so each kid gets a chance to get dressed.

If you're hosting a party that includes a lot of kids or a princess pirate party, you can expand the pirate theme to fit everyone's interests with an active game of Pirate, Princess, or Parrot.

You'll need a large, open space like a gymnasium or field to play. Show kids how to do the correct pose for each character and encourage them to add appropriate sounds or phrases to each. 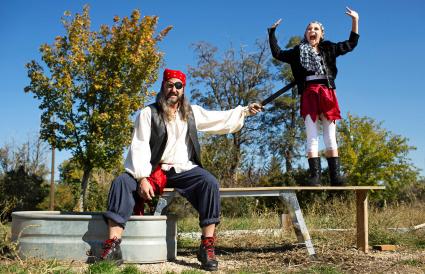 Rather than walking a real plank, kids can reenact this popular pirate adventure with a fun musical game instead! This fun music and movement game is perfect for expending anxious energy. For an easy variation, play like Musical Chairs only replace the chairs with planks.

To construct, cut large pieces of cardboard into strips resembling wide, narrow planks. The plank segments should be wide enough for the children to stand on, but small enough to require balance.

Pin the Tail on the Parrot

As a clever variation to the popular pin the tail on the donkey game, a pin the tail feather on the parrot is certainly a more festive option for kids pirate games.

Treasure hunts are a must for pirate parties. For a unique and easy spin on a traditional treasure hunt, stuff chocolate gold coins with small, handwritten clues as to where the kids should hunt for their next treasure.

A treasure hunt can be like an Easter egg hunt where kids simply run around looking for little pirate themed prizes or like a scavenger hunt that involves solving clues to find a treasure. Either way, you will need treasures such as an eye patch, costume jewelry, swords, compasses, toy sailboats, and skull and crossbones themed gifts. For the scavenger hunt, you'll also need to write out pirate-themed treasure hunt clues.

Find the crocodile is a popular activity that requires little more than a timer and an active imagination!

Set an egg timer for a specific time, the younger the child, the longer the time. Hide the timer in a creative and inconspicuous place.

If the weather allows, gold panning is a clever pirate game that kids are sure to enjoy!

Fill a sandbox or kiddie pool with sand and bury gold spray painted rocks in the basin. Make a sifter for each child by poking holes in the bottom of an aluminum pie pan.

Inventing Your Own Kid Pirate Games

There are endless ideas for pirate games including active games and pirate board games! Use your imagination, natural resources, and consider the weather when deciding on appropriate pirate games for your next themed party. Pirate parties are memorable, exciting for children, and the expense can be kept to a minimum with proper planning and well-thought-out games and activities.