Summer camp has long been considered a rite of passage. Kids look forward to camp with a mixture of fear, trepidation, and excitement, eager for their first taste of independence and adventure. Parents sending their kids off to camp for the first time are often full of anxiety, wondering if it's the right time and if their children are really ready. Jeff Carter, co-director of Rockbrook Camp, a traditional overnight summer camp, sheds some light on the benefits of camp and ways in which parents can make the transition easier.

Jeff Carter has had a lifelong love of summer camp. He says, "I attended Boy Scout camp as a child and loved the variety of activity, the friendships made, and the regular contact with the outdoors."

As Carter grew up and attended college, first earning a BA from Davidson College, then a MTS from Harvard Divinity School, and finally a PhD from the University of Chicago, he retained his love of the outdoors. An avid backpacker, hiker, mountain biker, and paddler, Carter worked as a hiking and climbing guide for Rockbrook. It was there that he met his wife, Sarah. Eventually the Carters were selected as co-directors of the camp.

Rockbrook Camp is located in the mountains of western North Carolina, and caters to girls ages 6-16. Carter says, "An all female environment allows girls to relax without the attention and pressure of boys. It provides an emotionally safe context for them to explore who they are as individuals."

Rockbrook is owned and operated by Jerry Stone, and is accredited by the American Camping Association.

Most children benefit greatly from their time at summer camp. The level of growth that kids experience in just a few short weeks is usually apparent. Carter, as camp director, gets to see this growth firsthand. Over the course of a camp session, he says, "Most seem to relax and open up more. They also develop more self confidence as they try new things."

Traditional summer camps generally strive to offer a well-rounded experience, with a variety of activities from many different disciplines. Rockbrook, for example, offers:

"The camp encourages girls to be physically active and to try new things," Carter explains. "We want the girls to be able to experience things unavailable to them at home, and for them to experience a level of success when they try."

For many children, summer camp is their first experience being away from home for any length of time. While this can be frightening for parents, it's often exhilarating for the youngsters. At most camps, children get to choose which activities to participate in. According to Carter, children blossom under structured independence. "Away from their parents, yet in the safe environment of camp, they get to see the effects of their own choices," he explains. "This kind of independence, being trusted with this kind of responsibility, can really be a source of pride for the girls." 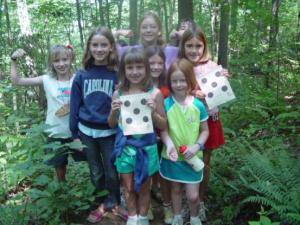 The experience of being away from home and in a completely different environment results in close friendships. At camp, the kids spend large amounts of time talking and getting to know each other, all without the pressures and stereotypes that often exist at home or in school. Carter says that the camp environment gives children the freedom to be themselves and to "feel welcomed and part of the group."Although kids only spend a few weeks at camp, the bond that forms is often intense. Campmates come to feel like family. "Most say camp friends are the best they've ever had," Carter says. "Camp friends always come to your wedding!"

Each summer camp has its own special traditions, things that make the camp unique. These traditions contribute to the sense of family and community that campers enjoy. Carter says that Rockbrook has several such traditions, but his favorite is Spirit Fire. "It happens on the closing night of each session," he explains. "Everyone attends. We give out awards, sing songs, recall highlights of the session, and at the end have a silent procession around the lake, each camper holding a small white candle. It's a meaningful moment when we all recognize our relationship with each other and how it's developed and grown at camp."

For parents, choosing the right camp is often the hardest part. Carter says the following things are indications of a quality camp:

In addition, he says, parents should consider the following:

When possible, Carter recommends that parents visit the camp and speak with the director.

Carter says that most children do surprisingly well at camp. "If a girl is outgoing, adventuresome, friendly, and someone who enjoys new experiences, camp will be a great experience... and with encouragement and preparation regarding what to expect, even the most shy girls will do very well."

He says preparation should include the following:

After the children are at camp, Carter says parents should write many positive and encouraging letters.

For more information about Rockbrook Camp, to order a DVD and catalog, or to register:

You must act quickly, because spaces fill up fast. Carter says that returning campers usually register in the fall. "That said, sessions don't usually fill up until the spring," he elaborates. "Then, too, we occasionally have cancellations, so it's worth calling even in May."