Halloween is one of the best-loved holidays, and it's not difficult to understand why. Costumes, candy, and running through the neighborhood at night all add up to some awesome fun, so capture some of the magic and mayhem in a few Halloween poems for children.

Halloween poems can be used on holiday cards, in scrapbooks, or even for homemade decorations and crafts.

What Shall I Be for Halloween?

Halloween is coming so,
I wonder what I should be?
How about a witch who flies her broom
High above the trees?

Maybe I'll be a princess
In a shimmering pink gown,
With lots of pretty rhinestones
Glued all over my crown.

Maybe I'll be a scary ghost
Floating around under a sheet.
And I'll shout "Boo!" and wave my arms
At everyone I meet.

Maybe I'll be a naughty black cat,
Who sneaks from house to house,
And meows and scratches at people's doors
Until they give some candy out.

Or maybe I'll be a gypsy girl,
And wear a scarf over my hair,
And I'll offer to tell people's fortunes,
As I fix them with an icy stare.

I'm still not sure what I should be,
But one thing's very clear.
If I don't make up my mind soon,
I'll miss Halloween this year.

An Ode to Candy Corn 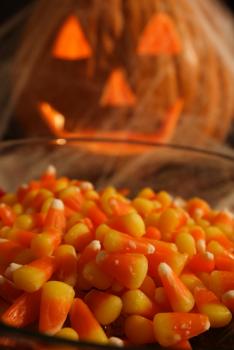 Candy corn, my favorite Halloween treat,
Shaped like a triangle and oh so sweet.

Colored white, orange, and yellow,
Chewy and yet oh so mellow.

I could eat you by the pound,
But I fear I'd grow quite round.

So I'll miss you all the months in between
And we'll meet again next Halloween.

Cutting Through the Cemetery on Halloween Night

Cutting through the cemetery
On Halloween night,
My brother and I
Had a terrible fright.

Behind a gravestone,
We heard a creepy rustle.
We said to ourselves,
We'd better hustle.

We ran across the graves,
Hopping tombstones as we went
But that rustle followed us
Just like it was hell-bent.

The cemetery wall
Loomed up ahead,
We had to make it over,
Or we'd meet that thing we dread.

My brother shinnied up that wall
And over with amazing speed,
But as I was climbing over
Something tried to grab my feet.

Brother reached up for my hands,
And pulled me over and to the ground.
And as my feet broke free,
I heard a most distressing sound.

The thing gave a grunt, and then
A blood-curdling shriek.
And then it rustled into the dark,
Howling with defeat.

The moral of this story
Is listen to your mother.
Stay out of the cemetery on Halloween,
Or you may never see another.

The House on Galveston Street

I warn you do not trick or treat
At the house at 306 Galveston Street.
There's something there you don't want to meet
Behind that darkened door.

Don't walk through that gate that creaks,
Don't walk up that overgrown path.
Don't knock on that weathered front door,
Or you may feel its resident's wrath.

It's covered in fur and has pointy ears,
And it lets out a terrible howl.
If you get close enough to smell its breath,
You'll find it smells most foul.

True, the creature is just eight inches tall,
But don't let its size fool you.
That Chihuahua can latch onto an ankle,
And seek its teeth right through!

Confessions of a Halloween Prankster

I egged Mrs. Wilson's house
While out celebrating Halloween.
I did the deed planning to run away fast,
And I thought I would get away clean.

So imagine my surprise when I realized
There was a witness at the scene.
Mrs. Wilson's big dog came barreling out,
Growling and looking quite mean.

That dog chased me all the way to my house,
And started barking and causing a scene.
Pretty soon Mrs. Wilson tracked him down
And found out the egg thrower was me.

Tomorrow I'll go back to Mrs. Wilson's house
To clean up the scene of my crime,
And then I'll go home and up to my room
Where, for the next two weeks, I'll serve time. 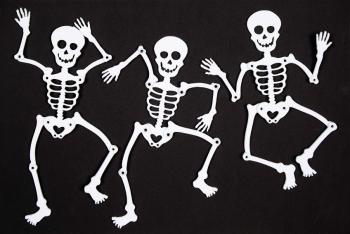 Three skeletons came out to play
Beneath the silvery Halloween moon.
They danced and merrily frolicked away,
To the sound of a distant tune.

And as they danced around they spied
Some trick or treaters with jaws hanging open.
Their eyes were filled with disbelief,
But not a single word was spoken.

So the three little skeletons turned to them,
And gave them their very best smiles,
And held out their arms to invite them all
To join their dance for a while.

"Little children come dance with us,
We don't mean you any harm.
We're just three little skeletons,
And there's no cause for alarm."

"We may look a little bit scary, but
We love Halloween just like you do,
Surely there's room for all to have fun,
So we'd like to trick or treat with you."

Despite the skeletons' friendly words,
The children refused to take part,
And they ran away, every last one
With fiercely beating hearts.

The skeletons were disappointed,
But they shrugged their shoulders and said,
It's too bad they wouldn't join us, so
We'll just trick or treat by ourselves instead.

Toddlers and preschoolers can get in on the Halloween fun with engaging poems and fingerplays that include hand or body motions.

Use the rhythm of the classic nursery rhyme "Jack and Jill" for this simple interactive poem by Michele Meleen about trick-or-treating.

Ghost and Witch (Hold up the pointer finger then middle finger on one hand to represent the characters.)
Went to the door (Hold the opposite hand up flat to be the door and make the finger characters walk to the "door.")
asking for some candy. (Put hands together in prayer position and shake on each syllable.)
Ghost saw a clown (Put one finger back up.)
and ran back down (Make the finger move behind your back.)
to the safety of his Mama. (Bring the finger back in front of you and wrap the opposite hand around the finger.)

Show Me Your Costume 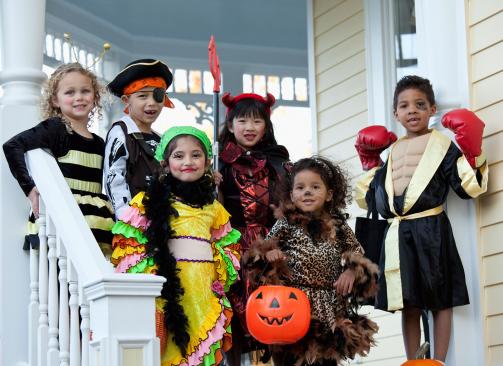 Modeled after the nursery rhyme "Little Boy Blue," this active poem by Michele Meleen allows kids the chance to get creative and make up some of their own movements. It's best to do this entire rhyme while standing. Each time you reach the end, choose a child who can show or tell what their actual Halloween costume will be.

Halloween friend, (Wave to another person.)
Show me your costume! (Stand and twirl in a circle.)
I'm going as a monster, (Make a scary face and hold hands up like claws.)
she's going as a queen. (Do a bow or curtsy.)
But, what will your costume be? (Put both hands up at shoulder height with palms up like the gesture for asking a question.)

Counting poems are great for younger kids and can be adapted to any element of Halloween like this candy poem by Michele Meleen. In each verse, you'll hold up the appropriate number of fingers as described in verse one.

Four little candies
waiting just for me, (Cradle four fingers with your other hand and rock them.)
one jumped into my mouth
and then there were three.

Three little candies
left for me to chew, (Bring hands toward the mouth and move mouth as if eating a lot.)
one jumped into my mouth
and then there were two.

One little candy
left for me to eat, (Make bowl shape with one hand and point one finger from opposite hand onto the center of the palm.)
it jumped into my mouth
my last Halloween treat!

Halloween poems run the gamut from silly to spooky and everything in between. Make sure the poems you choose are suitable for the children who'll have the opportunity to enjoy them and include them with the rest of your Halloween activities.