If you're looking for a fun party theme for your child, a cowboy or cowgirl themed party offers a lot of options for decorations. The best part of a cowboy party is the wide variety of wild west games for kids you can tie into the overall party idea and keep the party guests happy. Even if you aren't planning a party, these cowboy party games are perfect for just about any occasion that involves a group of children.

In the Old West real cowboys lived by a code that involved being kind and considerate of others. In this simple party game for older kids, guests collect "badges" by catching others disobeying the code. Since the game involves all the party guests, it works great for Western-themed family picnics and school carnivals.

This take on "Rock, Paper, Scissors" is easy to play with small or large groups and young or older children. You can make up hand motions for the horse, the hat, and the cowboy or use real items as described. 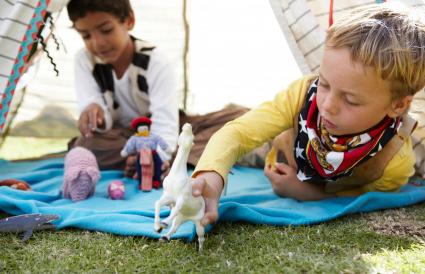 It's law enforcement versus outlaws in this "Capture the Flag" style game ideal for large groups of kids ages ten and up.

Challenge kids' lasso skills with a fun game that gets harder as you go. If you have enough supplies, you could even set up several of the same game and run it as a relay race with teams. 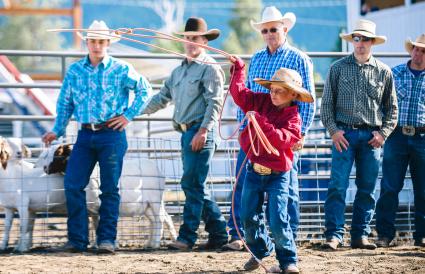 I've Got a Snake in My Boot!

One popular cowboy character is Woody from the movie Toy Story. One of the things Woody says when his string is pulled is, "There's a snake in my boot!" With this Woody-themed game, children are given four or five rubber snakes to try to toss into an old boot.

Using water guns, children attempt to shoot down empty soda cans sitting on a flat surface in the distance just like you see in old Western movies. 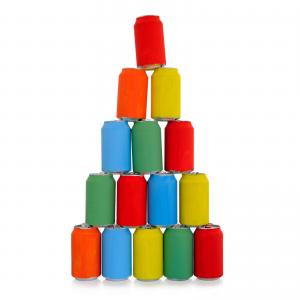 Obviously, you aren't going to transport a herd of cattle into your yard to play this game or shove them into your living room. Instead, balloons are used to represent the cattle in this active game.

What's a cowboy without his horse? Kids will use stick horses to maneuver an obstacle course.

Common Games With a Cowboy Twist

Cowboy Video Games and Board Games

If you don't have time to spend on setting up games, you may want to check out a few board games and video games. Also, if you are working with a very small group of children, these games may be better suited than if you have a larger group to entertain.

Make Up Some Cowboy Games

Most games can be turned into cowboy games for children with just a little creativity, a little atmosphere and some fun costumes. Just supplying kids with cowboy hats and red bandanas may be enough for them to come up with their own games. Many traditional games such as Tag, Tug of War, or any kind of race game can become western with just a bit of variation. While the games mentioned are great ones with which to start, your own little cowpoke may have some games he's thought up himself. Ask him for his ideas.