It's no secret that very young children learn by watching the world around them. However, the Early Childhood Curriculum Framework points out that whether your child is very young or much older, he is still learning by observing your behavior.

According to research published in Pediatric Institute Publications, babies and toddlers learn by observing adults, even when those adults aren't intentionally trying to teach them anything. For example, you may see a child imitating parents by pretending to talk on the phone, using any object she has at her disposal. Your child is learning how things work and what to do with them just by observing you. You must be careful, however, because kids at this age are also incredibly good at imitating behaviors you don't want them to, such as cussing or throwing things when you're angry. 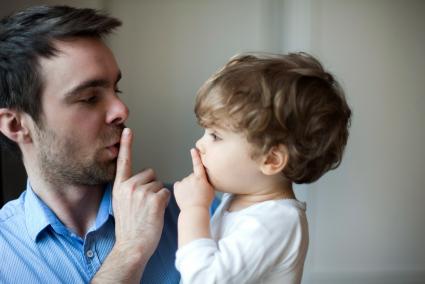 According to research conducted at Temple University and the University of Washington, and published in PLOS One, babies observe and learn to imitate the bodily movements of their parents as they perform certain actions. Information garnered from brain scans used during the research shows that a baby sees the adult using her hand or foot, for example, which produces a response in the sensorimotor cortex of the baby's brain that helps him learn to copy the behavior. You can use this child mimicking parent response to your advantage by showing your little one how to reach for his toys, how to crawl on all fours, how to walk and eventually how to run, jump and throw a ball.

You might think that love and affection are ingrained in babies, but that isn't the case. In fact, Maia Szalavitz, author of Born for Love: Why Empathy is Essential - and Endangered, tells Psychology Today that a lack of love during the infant years can actually kill a child. As a parent, you naturally nurture, hug, sing to, kiss, snuggle and otherwise show your feelings for your little one.

You can teach your child to mimic loving behavior by being affectionate when your baby is looking for it and making sure to accept affectionate advances from your baby when she displays them, says Harriet Heath, author of Using Your Values to Raise Your Child to be an Adult You Admire, on the Parenting Press website. Research in the Journal of Epidemiology and Community Health backs this up by reporting that maternal affection has a large impact on how children respond emotionally throughout their lives.

Preschool is a time of great strides in development for most kids. As they head off to school, even if it's just a few hours per week, they have an increased opportunity to pick up on new things. According to the Talaris Institute, preschool gives kids the chance to see other kids in action, which provides many instances for imitation. At the same time, children are learning to socially interact with other people their own age.

Watch What You Say

The preschool years are a time when your child begins to make a jump in terms of language. The way you talk and the words you use play a big role in how quickly and properly your child learns to speak. The Journal of Speech and Hearing Disorders reports that imitation plays more of a role in developing communication skills and less on the structure of language. That means your child will begin to pick up on the tone of voice, when to use certain words and how to convey their meaning, even though correct grammar and pronunciation might not follow for several more years. 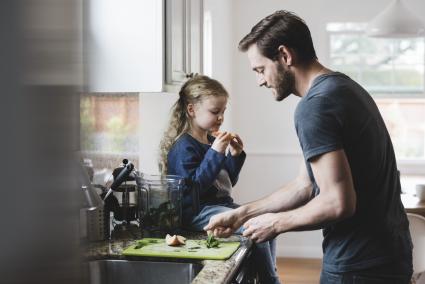 Another example of imitation-prone behaviors are those involving eating habits. According to information published in The Journal of Law, Medicine and Ethics, children learn how to eat based on the beliefs, attitudes and behaviors of the adults they spend time with. That includes both what to eat and how to eat it. Parents who routinely eat a variety of healthy foods help teach their kids to make the same choices. On the other hand, watching their adult caregivers eat junk food or fast food instills that pattern of eating in the child.

During the preschool years, your child is especially vulnerable to adult modeling. During the early years, babies and toddlers imitate without a concept of why. Now, your child is starting to pick up on the underlying cues that drive behavior, say the experts at the Talaris Institute. Use the following suggestions for modeling positive behaviors for your preschooler.

As your child gets older, you might assume he isn't learning from imitating you anymore. That couldn't be further from the truth. Children at this age still spend plenty of time with their parents, so the learning process is still going full steam.

The American Academy of Child and Adolescent Psychiatry reports in their Facts for Families publication that exposure to violence is one of the key contributors in children imitating violent behaviors. Research published in the journal Pediatrics reports that physical punishment toward a child contributes to the perpetration of violence on the part of that child. On the other hand, parents who display conflict resolution without violence can model those behaviors to their child, helping them learn to imitate the more desirable actions. 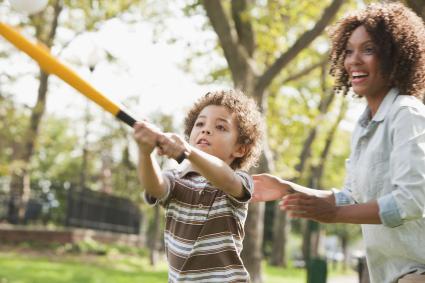 In the Journal of Sport Behavior, researchers say that the sportsmanship behaviors of a child might correlate with those of the people watching the sport (i.e. parents). The study shows that the instances of good sportsmanship on the part of a child tend to increase with positive behaviors from parents, coaches and other spectators. The findings go to show that children are picking up on what constitutes acceptable behavior during sports.

Also at this age, social cues play a role in imitation, adds the PLOS One journal. That means your child is likely to combine the actions he sees you displaying with those he picks up from his peers and other adults in his life, such as teachers or coaches. The Raising Children Network offers the following suggestions for giving school-age kids positive actions to imitate.

There's no doubt that the pre-teen and teen years are tough to navigate. Children at this age tend to want to display their independence, but parents still have a valuable role to play. Despite spending more time apart, pre-teens and teens still observe and learn from watching adults and imitating them. This proves how powerful a parent's behavior is in shaping the behavior of their pre-teen or teen.

These are the years when kids begin to learn who they are and want to try things on for size. That includes behaviors that aren't safe. According to research published in the Journal of Public Policy and Marketing, parental smoking plays a large role in a pre-teen or teen's decision to try cigarettes. By smoking in front of your child, you normalize the behavior, and your child is much more likely to light up because she assumes it's part of life, despite hearing all the hype about how bad cigarettes are for health.

The pre-teen and teen years are important in terms of learning positive self-image. According to research published in Paediatrics and Child Health, the adults that pre-teens and teens see in the media can have a huge influence on self-image. Research shows that movie stars, television actors and magazine covers can result in negative feelings about appearance and is some instances can drive eating disorders. 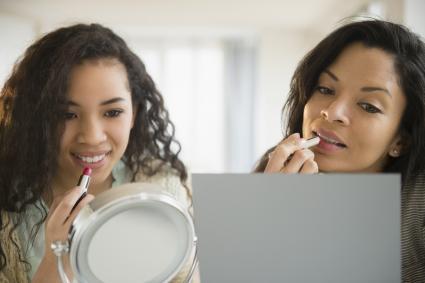 The experts at Kids Health suggest being careful how you talk about your own appearance, say positive things about your child that don't have anything to do with his looks, allow your child the freedom to come to you with any of his concerns and generally try to show your child how much you like yourself so that he will do the same.

In addition, during the junior high and teen years, imitating negative behaviors can hinder a child's development, according to Yale University. While the research examined younger children, experts feel that the results fit kids at all ages. If a pre-teen or teen observes a parent engaging in a behavior that is worthless or that gets in the way of completing tasks or maintaining relationships, they may still imitate it even if they know it isn't beneficial.

Imitation and Children With Autism

Research on children with typical development has shown that there are two reasons why children imitate. The first is to learn and acquire new skills. The second is to socialize and engage with others. It has been found that children with autism have greater difficulty with imitation. This is especially true with their social use of imitation however the learning function may be less affected. There may be other areas of development that can be directly affected due to the impaired imitation abilities of children with autism which include:

According to researchers, imitation is an essential focus for children with autism due to its connection to other areas of development, therefore teaching imitation can help improve the children's social skills.

Obviously, no one is perfect and there are bound to be times when you slip up and make a mistake, whether you let an expletive fly when someone cuts you off in traffic or you tell your sister-in-law that you're sick to get out of a family event. Your child is bound to question you for these actions or even test the limits by copying them, whether he's a toddler or a teen. According to Purdue University, the best way to mold your child's behavior is to show him how to act, no matter his age. When you do make a mistake, model the proper way of making amends so your child learns how to fix his own mistakes now and as he gets older. It's not easy to be on your best behavior at all times, but by doing your best most of the time, your child learns how to act in the world around him.

0
Comments
© 2006-2021 LoveToKnow, Corp., except where otherwise noted. All Rights Reserved.
How Children Learn by Observing Behavior of Adults