Children's poems have long been a literary favorite that uses rhythm, rhyme, pattern, tone, mood, and form to convey meaning. Young children are naturally attracted to the rhythmic sounds, patterns, and word-play in children's poems. From narrative poems to lyrical poem examples for kids, there are lots of options for helping children learn about poetry.

Poetic forms follow a specific set of rules so you can tell them apart from other types of poems.

Pronounced "sin-cane," this type of poem is simple and includes only five lines. A cinquain doesn't need to rhyme, but it must follow specific guidelines in terms of the number of syllables per line. The first line has 2 syllables, the second line has 4 syllables, the third line has 6 syllables, the fourth line has 8 syllables, and the last line has 2 syllables. Since the poem is often meant to tell a story, you can use the following directives for each line in order: subject, description, action, feeling, conclusion. This poem title "Snowflakes" by Michele Meleen is an example of a winter cinquain:

Snowflakes
falling softly
down from the dark gray sky,
tickle my nose and kiss my eyes
Snow plays.

"Time to rake the leaves
And pick the biggest pumpkin
Carve him a mean face."

Limericks are humorous poems that follow a very specific pattern. It is a five-line poem made up of one couplet and one triplet with the rhyme scheme of AABBA. Limericks are usually light and humorous. It is said that the limerick was originated in the town of Limerick, Ireland in the 1700s. A fun example is Carly Schuna's limerick about a hippo that starts:

"There once was a hippo named Tate.
But sadly, he was underweight."

Lyric poems take their name from poems that were traditionally written to accompany the lyre. They are usually short, personal poems, often written about a single subject, with one voice. Examples of lyric poetry are the elegy and the ode. Lyric poetry appeals to children because they are rich with descriptive words and poetic devices like similes and metaphors, which allow children to experience both their world and language in different ways. Lyric poetry often is written in traditional couplet and quatrain form with end rhyme. Michele Meleen's original ode called "Ode to My Hamster" celebrates a common childhood pet:

Oh Fluffy
you are as soft
as any blanket I could buy.
Your cotton ball legs
and stuffed squirrel cheeks
make me want to snuggle you
day and night.
But when I sleep, you are awake
and when I wake you fall asleep.
Oh Fluffy
I can't wait to pet your velvety fur
and hold you and squeeze you
and love you forever.
Fluffy, puffy Fluffy
I couldn't have chosen a more perfect pet.

Narrative poems use the conventions and elements of poetry to tell a story. The history of poetry is rich with narrative poems that were passed from generation to generation by word of mouth. Ballads, poems written to be sung, are the most well known type of narrative poems, and their classic stanza form and use of repetition make them popular with children. They also lend themselves to read-alouds. This ballad called "Loose Teeth" by Michele Meleen shows one way to write a narrative poem:

Odin had two small teeth to lose
but they chose to stay stuck.
So he tied a string to his tooth
one end to a truck.

He asked his dad drive that truck
with a heavy lead foot.
But, those teeth didn't want to budge
instead they stayed put.

Nursery Rhymes are an excellent way to introduce very young children to poetry. Mother Goose nursery rhymes are the most well-known and appeal to young children because they are short, familiar, and easy to read. Many of them also incorporate body movement and have been set to song. One fun example is "Hey, Diddle, Diddle" that starts:

"Hey, diddle, diddle,
The cat and the fiddle,
The cow jumped over the moon."

Poetic styles are common ways of writing poetry that don't necessarily follow specific rules like a poetic form. These styles can be used in any form of poetry.

Simile is a literary device where you use the words "like" and "as" to compare to very different things to each other. This can be used for serious or silly poems in any form. An example of a simile poem for kids is "The Old Man and the House Mouse" by Kelly Roper that starts with the lines:

"The little mouse scurried around the house
Like a thief who snuck in one night."

One type of figurative language kids can use in poetry is a metaphor where you compare to unlike things by saying one thing is the other thing. Tara Kunesh's poem "A Strawberry Sundae" uses metaphors to compare an ice cream sundae to a landscape. The opening lines read: 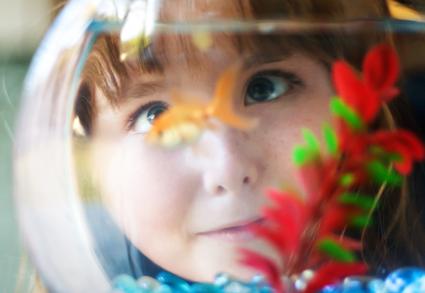 Using the poetic device onomatopoeia means using phonetic words to recreate the sound something makes. This can make poems more fun and lively. Kelly Roper's "Swish Went the Fish" opens with the fun sounds a swimming fish might make:

"Swish, swish, swish,
Went the little goldfish
As he swam around his bowl."

Children of all ages enjoy poems that make them laugh. Kelly Roper's humorous poem "There's Doggie Doo on My Shoe" is a great example for kids that starts out:

Free verse poems are great for kids because there are no rules to follow. The idea is to state your emotions or story across several lines in a meaningful way. Many free verse poems use different literary devices such as alliteration or personification to help convey the emotion of the subject. When writing a free verse poem, kids will want to choose words very carefully and experiment with the pacing of the lines. One example of a free verse poem for kids is "Get in the Game" by Michele Meleen that describes the excitement of playing a video game with the opening lines:

Reading poetry to young children helps them develop phonemic awareness and explore the sounds of language. Older children are able to better understand and express their emotions by reading and writing poetry. The key to writing great poems is finding the form that works best for your style of writing. Try out different types of poetry to figure out which best expresses what you want to say.