Help kids in preschool and kindergarten learn their letters or upper elementary kids practice their alphabet skills using ABC game ideas for kids. You can create your own alphabet games or play creative ABC games indoors, outdoors, and even online to teach letters and phonics.

Children's alphabet games are simple and straightforward so the focus is on letter learning. ABC games for kids can be active or include printable phonics worksheets to teach different aspects of the alphabet including:

Print one of these fun connect-the-alphabet, or ABC dot-to-dot, PDF worksheets. Children connect the dots by matching the letters in the correct alphabetical order to draw the picture. Click on the worksheet to download and print using the Adobe guide if you have any trouble.

Time your child in this sequencing challenge when they are first learning the alphabet then again after they've mastered the order of the letters to show how much they've learned. Write each letter of the alphabet on an index card. Scramble the index cards up then have children put the alphabet in the correct order. You can also use this challenge as a game where the fastest player wins. 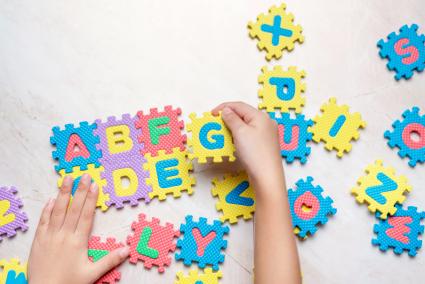 Letter bingo is easy to make using a plain bingo board template and easy to play over and over. Create a bingo board with capital letters and write out corresponding index cards with the matching lower case letters. Begin showing children the lower case letter cards, and children can place their bingo chips over the corresponding capital letters. The first child to get a row covered on their board is the winner.

Kids will need to solve the mystery of where each of five letters belongs in this easy indoor ABC game. Place individual letters of the alphabet across the wall or floor. Choose five letters to take away. Give these letters to the children and ask them to place them back in their proper place.

Kids who are ready to start building words from letters can use this DIY tool to practice or to compete in a spell-off. 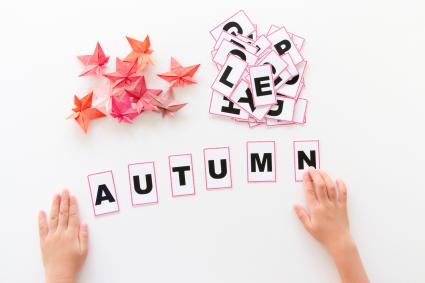 Give kids an indoor alphabet fishing experience like no other with this DIY alphabet game.

When you've got nice weather and a safe, open space you can play ABC games outside in your yard, on a sports field, in the woods, at the beach, or in a park.

Use sidewalk chalk to draw a simple alphabet grid where kids can get out some energy and recognize letters. 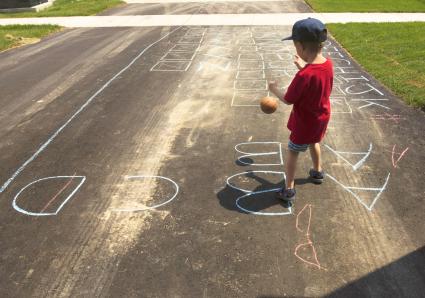 Send kids on an outdoor scavenger hunt for natural items that begin with different letters of the alphabet in this group game. Play with all the same rules as a typical game of Simon Says. Call out a letter. For example, you might say "Simon says find something that starts with the letter N." If you said "Simon says" before your directive, kids will run around the yard or park and bring back an item that starts with the letter you called out. All kids who are correct stay in the game. If you did not say "Simon says" before your directive, kids should not move. Any kids who run off to find an item are out. The last child standing is the winner.

You'll need beanbags or small stones and some chalk to set up this active outdoor throwing game.

Choose any type of tag as the basis for your ABC tag game. You'll need at least five people to play. Once you have chosen someone to be "It," call out any letter of the alphabet. The person who is "It" will try to tag any player who is wearing something that starts with that letter or whose name starts with that letter. For example, if you called out "B," the person who is "It" could tag Billy or someone wearing a blue shirt. When "It" tags someone he has to call out the word. The person who gets tagged is the next to be "It" and you call out a new letter.

The Ground Is Lava Alphabet Version

Kids of all ages can play alphabet games on a computer, tablet, or phone to reinforce letter learning. Many educational websites and companies offer free games to help kids recognize and use letters.

If you're looking for a kid-safe app for your child to play alphabet games, ABC Kids Tracing & Phonics app is a great option with four-and-a-half out of five stars in the Google Play store. There are no in-app purchases or third party ads in this full-version app. Bright animal graphics interact with kids as they play games that incorporate letter tracing, connect upper case and matching lower case letters, and match letters with pictures. Kids earn fun stickers for their achievements in each game.

Big Bird and Snuffy's Letter Dance Party on PBS Kids games is great for learning to write capital letters. When the party starts, there are no letters, so you have to trace each one to bring it to the party. Kids simply move the mouse to trace the letter on the screen then hear the sound it makes and the name of the letter. Each letter then enters the party with a gift kids have to click on to open. The present is something that starts with the letter who brought it. This game is free and opens in its own small window making it perfect for young children because there are no distractions on the screen.

ABCya! features dozens of free alphabet games for preschoolers all the way up through elementary school kids. In Adventure Man & Danger Dame Dungeon Dash: Letters, kids can play as either the male adventurer or female adventurer character. From there you choose between six different letter lessons like upper case only, consonants and vowels, or all categories. Kids can use their finger on a touch-screen device or use the mouse or keyboard arrow keys on a computer to play. Gameplay is pretty simple, but kids who can't read yet will need help reading which types of letters to choose on each level.

Fun With the Alphabet