Whether you're teaching acting to a group of kids, or you just want to use some theatrical games to help your students break the ice and get comfortable performing, you'll quickly find that most kids really enjoy these types of games. The best part is that students may not even realize they're learning valuable acting skills - they just know they're having fun.

These games allow students to get comfortable on stage while also introducing them to some basic theater fundamentals.

Here is an example of a sequence:

Projecting your voice onstage is a learned skill. This game is simple, serves as a great ice breaker, and gives students practical experience with projecting their voice so everyone in the audience can hear them. 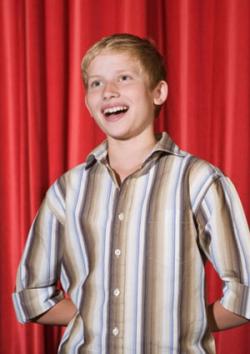 Seat students in the back of the theater or room. One by one, a student will take the stage and proudly stride to center stage, face the audience, and proclaim, "My name is (name), and I am an actor!" The student then bows and exits while the other students applaud.

Staying in character can be difficult for young actors, especially when they are first learning about acting and don't necessarily understand characterization. This game may seem like a fun, competitive game, but it teaches students the importance of taking on a character and not "breaking" it. 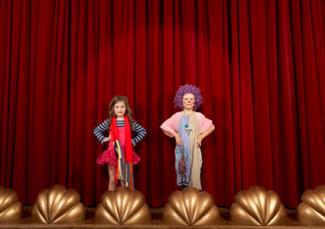 If you find that the game is taking a little longer than you thought, you can start making silly faces or doing other things to try to make the kids break character.

Storytelling is an important part of acting, particularly for those who plan on pursuing improv, where there is no script and the actors make up the story as they go along. Many students also act with a little more enthusiasm and exuberance when they're allowed to create their own characters.

This game allows for one storyteller and one actor. The storyteller stands to the side of the stage while the actor takes center stage. The storyteller retells his or her day - this can be a true retelling, or can be a completely made up story. The actor then acts out the story as it is told.

Demonstrate to the students that even the simplest of stories can be made into hilarious retellings when done correctly. For example, "I ate pancakes for breakfast" might turn into the actor pantomiming out the act of eating so many pancakes that a stomach ache ensues.

You can add more players to this game by allowing the storyteller to bring other people into the story. For example, the storyteller might say, "Then my mom walked in the room," pointing at another actor who then goes onstage and takes on the role of the mom.

Stage actors need to have a certain charisma that draws the audience's attention. This game teaches students to use their voices, bodies and storytelling abilities to capture the attention of the audience.

Taking on a character and making it a believable performance can come easier to some students than others, but with the right skills, it gets easier each time.

Two Truths and a Lie

Being able to convince audience members that what you're saying is true, even when it isn't, is an important skill for actors.

One important acting skill that is often overlooked is the skill of reacting. It's one thing to act, but students also need to learn to react to the other things going on around them on stage instead of just waiting to deliver their next line.

For this game, one person is crowned king, and the other is crowned queen. The rest of the actors are all partygoers.

This is a particularly fun game to watch as a teacher. You may be surprised by how quickly students take to this game, and how easy it is for the students to get into character when there's no script. Allow everyone a chance to play both the king and queen.

This is another acting game that helps kids learn about staying in character. Give each student a folded piece of paper that they don't open until they're on stage, ready to act. Each student gets a different paper, and each one is something unusual about the character they're playing. For example:

One student takes the stage while the other students act as the media in the audience. The media members start asking questions, trying to figure out what the unusual thing about the actor is.

The actor should not only respond to the questions as the character, but should also act out the unusual thing. For example, the actor with her pants on fire might respond to questions hastily while trying to put out the fire. The media member who correctly guess what's going on gets to then take the stage.

Give students the opportunity to do things onstage that they don't normally get to do in real life, and you'll likely have students who develop a real love of acting.

This scene is simple: an actor lies on the stage, seemingly dead, while another actor comes on stage and discovers the body, then screams a horrific scream.

You may be surprised to discover that your students are initially apprehensive about delivering a good, blood-curdling scream. There is a good chance that they'll at first give a half-hearted scream. In fact, you may have to demonstrate to the students how to give a good, loud scream. After you show them that it's OK to really put some passion behind the scream, they will likely follow suit.

This is a simple game, but it's an incredibly effective one. It teaches students that there are things on stage they can do that they aren't supposed to do elsewhere. For many budding actors, this game can be freeing.

Teach students that the stage is a safe place where they get to be someone else. Students who learn to be comfortable in front of an audience may not necessarily go on to be professional actors, but they will have an easier time conveying confidence and poise, which are two characteristics that will certainly serve them well into adulthood.