If you've ever been in the middle of a group of children when a colorful parachute is pulled out, then you realize the level of excitement this fun activity causes. A parachute is a great way to keep kids busy and engage them in group activity where they can learn everything from teamwork to basic skills such as the alphabet. 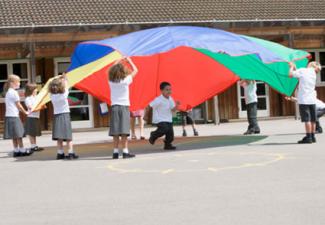 The children stand around the edges of the parachute and begin to shake it so it gently rolls. You'll want to choose a category, such as:

The leader calls out a letter, such as A, and chooses a child to come up with something in that category that starts with the letter A. For example, for food, the child might say "apple." If the child can't answer, then he goes to the middle of the parachute. The game continues with the child to the last player's right. The next time someone else is stuck for an answer, the person in the middle has a chance to answer that question. If he gets it right, he leaves the center. If not, he stays there and the other player joins him. The game goes until no one can come up with an answer.

If you are playing with very young children, you can simplify this game by simply having them give the next letter of the alphabet.

Have children grasp the edge of the parachute, and on command, lift their arms over their heads. While the chute is in the air, have children walk under and place their hands behind their heads while still holding the chute. This creates a centipede with various legs. A leader should then guide the centipede around the room. Remember to move slowly so children don't trip over one another as they won't be able to see where they are going. Also, if the children seem reluctant to go under the chute, allow them to stay on the outside of the parachute and shuffle along with the rest of the group. 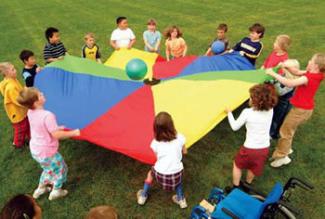 Place a lightweight ball, such as a small plastic beach ball, on the edge of the parachute. The children should grab the edge of the shoot, and try to take the ball around the chute in a circle. However, the players have to do what the leader calls out in the process. So, the leader might call out commands like:

This makes it harder to get the ball to go around the parachute. Once the ball goes around once, the game restarts.

Gather plastic snakes of different colors and sizes. Be sure to explain to the children that the snakes are pretend to avoid any fears. Place the snakes in the center of the chute and have the children pick up the edges of the parachute and hold it at waist level while standing. The goal of the game is to start with the number of snakes and count backwards using a short poem.

And so on until all the snakes are shaken off of the chute. 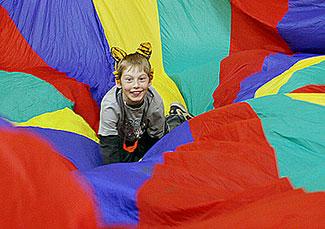 Children sit cross-legged on the floor and hold the edge of the parachute. Choose one player to be the shark. That player should go underneath the parachute. Another player is chosen to be the "bait" or "fish." The bait should crawl on top of the parachute, trying to avoid the shark. The other children, who are holding the edges of the shoot should shake the edges to try to camouflage the bait from the shark. A player must make it from one side of the chute to the other. If the shark tags him from underneath, then he becomes the shark. If the shark does not tag him and he makes it to the other side, then the player he tags on the other side becomes the new bait.

Use vinyl letters with sticky backing and place letters in each panel of the parachute. The size of the parachute will determine how many letters go in each panel. The easiest thing to do is to start by placing the letter "A" in one panel, putting "B" in the next and going around the parachute in this manner. When you come back to the "A" start again with the letter you are on. So, a green panel might wind up having letters A, I and R, for example.

Now, assign each team a color, number, or let them choose a name.

Explain that the ball (choose a lightweight ball, such as a beach ball) will be placed on the parachute and when you say to start shaking, the children will rapidly shake the parachute. When you call out the team name, color or number, only that team will move the chute. They can try to direct the ball to the panel they want to collect certain letters.

When the ball stops, those are the letters that team gets. Write them on a board. Make sure you call on all teams equally, so all have the opportunity to earn letters.

Once each team has letters to spell a variety of words (go with about 10 letters for younger kids and 20 for older kids), tell the teams they must use only the letters they collected and spell out as many words as they can. The team with the most words wins the game.

This game is similar to Word Catch, but uses numbers. Use vinyl numbers with sticky backing. Place numbers 0 through 9 around the panels on the parachute. If your parachute has more than 10 panels, you can skip a panel here and there.

Next, assign each team a number, color or name. Explain that you will place a lightweight ball in the center of the chute. Their goal when you call the team name is to get the ball to stop on a number so they can collect that number. The best course of action is to collect as many different numbers as possible, but duplicates can be used to create numbers like 11 or 22.

If your children are starting on more advanced math, you can also throw in symbols, such as addition, subtraction, multiplication or division.

Next, the students should solve each equation and then add the total of all the answers. The team with the highest number wins. 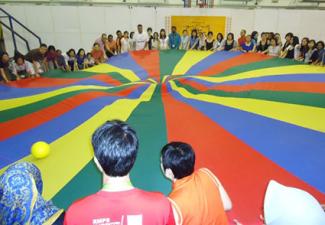 Divide the children into two teams. The teams should stand on opposite sides of the parachute, each taking up a half circle. Make the boundaries clear. Team A is from the green panel to the blue panel, for example. You may even want to use masking tape to mark the boundaries.

Throw a foam ball into the center of the chute (you can also use a balloon in a pinch, which is even more challenging to move around). The children must shake the parachute in an effort to get the ball to go out of bounds on the other team's area. Out of bounds is when it bounces off the side onto the ground. Children cannot use their hands or bodies to block the ball. They can only use the shaking motion of the parachute.

If the ball goes out of bounds on one team's side, then the opposing team gets one point. The first team to reach 10 points wins.

Divide the group into three or four teams. The children stand with the chute at waist level and one team goes underneath the chute. Five or six lightweight balls are thrown onto the chute. Those standing on the outside of the chute must try to keep the balls on the chute, while those underneath try to hit the balls from underneath and knock them off the chute. Instruct those in the middle to stay near the center of the chute to avoid any injuries from overzealous players. You may also want to have the center players kneel as a further safety measure.

Start a timer when the balls are thrown onto the chute. Once the team underneath knocks all the balls off the chute, stop the timer. Each team gets a turn underneath the chute. The team with the fastest time wins.

Have all the children sit on the floor with their legs straight out in front of them. The parachute is held at each child's waist, with the legs under the material. Assign one child at first to be the swamp monster. Assign two children to be monster hunters. To start the game, the children should begin to gently shake the parachute, creating waves as though they are sitting in front of water. The swamp monster is in the center of the chute, underneath the material. He goes around the circle and grabs the feet of victims and slowly pulls the victim into the swamp. The monster hunters can save the victim by pulling him away from the swamp monster, but only hunter at a time can help. Anyone who is pulled under becomes a swamp monster and must help pull people into the center of the parachute. The game goes until everyone but the swamp hunters has been pulled under the chute. Make sure and stress the idea that the victim must be pulled slowly.

An Activity that Includes Everyone

Parachute games are good to incorporate into parties, at schools or in large gatherings of children, because everyone can be included in the play. Children don't need any particular athletic skill to excel at these games, so they also create a sense of accomplishment. Plus, a vividly colored parachute is just plain fun.