In colonial times, the time period between the early 1600s and the late 1700s, there were no electronic video games or huge stores full of manufactured board games and toys. Instead, children relied on their imaginations and simple materials found around their homes to come up with colonial toys and games. In colonial America, games for children were fun, innovative and competitive.

Just like in today's modern world, colonial kids sometimes played games indoors and sometimes outdoors. Families were often large so there was seldom a lack of playtime companions. Many of the most popular colonial games are still played today.

Homestead Toys says that colonial kids played hoops by racing metal or wooden hoops along the ground with their hands or sticks. The hoops were often salvaged from old barrels.The object of the game was to keep the hoop rolling as long as possible and get to the finish line first.

The game of graces was another form of hoop play. In this game, players threw small hoops decked out in ribbons to one another, catching them on wands. This game was almost always played by girls since it was meant to make young ladies more graceful. To play, each player held two wands (or rods). Using both rods, one player positioned a hoop onto the rods and, using a scissor-like motion, sent the hoop into the air towards the other player. The other player caught the hoop with her two rods. The player who caught the hoop ten times won the game. 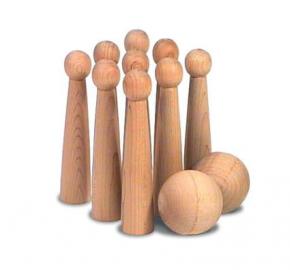 Ninepins was brought to the colonies by Dutch settlers. The game is very similar to modern bowling. Ninepins could be played on a tabletop with small pins or on a lawn with larger ones. The only materials needed to play were nine wooden pins and a ball. These were set up in a diamond shape. Each player rolled the ball ten times to see how many pins he could knock down. The player who knocked down the most pins won the game.

Quoits was basically a ring toss game and similar to horseshoes. Players had to toss rings made of metal, rope, leather or even tree branches, a set distance over a stake in the ground called a hob. Each player threw two rings per turn. Points were earned based on how the ring landed on the hob. The player with the most points won the game. Quoit sets could be large for outdoor play or small for tabletop play. 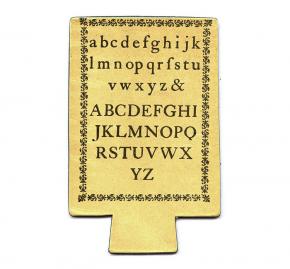 Battledores was an early form of badminton. Players would try to hit a shuttlecock with two wooden paddles, often while reciting rhymes. The paddles were often made of hornbooks, which were early reading tools made into the shape of a paddle. To play the game, two people hit the shuttlecock back and forth with their paddles as many times as possible without letting it fall to the ground.

Scotch hoppers was what colonial era kids called the modern game of hopscotch. It could be played indoors or out. The rules of the game haven't really changed over the years. To play, kids drew lines or "scotches" on the ground in square patterns. A stone (marker) was thrown onto a square and the player hopped through the course without hopping onto the square with the stone. After reaching the end, the player had to reverse course and return to the beginning square, being sure to pick up the marker on the way. Single squares were hopped on with one foot while two feet could land on squares that are side by side. For each consecutive turn, the marker was thrown into the next furthest square. 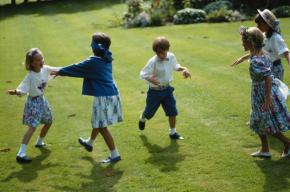 Blindman's bluff was a popular game for colonial children and adults. It was a game families could enjoy together and was popular on holidays and special occasions. Here's how the game was played:

What we know today as the game of jacks was called five stones or jackstones to colonists. To play jackstones, colonial children used stones, seeds or other small objects similar in size as the equivalent of jacks today. In place of the ball that accompanies modern day jacks, colonial kids used a round, smooth stone. To play, the stone was thrown into the air with one hand and a specific number of jackstones were scooped up with the same hand before the stone was caught. First, one jack would be picked up, then two, then three and so on. 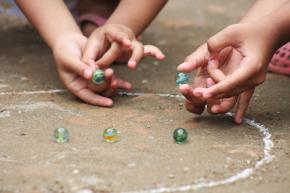 Colonial children enjoyed playing marbles. Claude Moore Colonial Farm, a living history farm, states on their website that colonial marbles were made baked or glazed clay, stones, glass or nut shells. To play marbles, players rolled or "shot" into another player's marbles in order to knock them out of a designated area. The player who knocked the marbles out of the area got to keep those marbles. Whoever had the most marbles at the end of the game won.

There are many variations on the colonial era game of marbles that continue to make this game a classic.

Jackstraws was the precursor to the modern game of pick up sticks. Materials needed to play were pieces of straw (broom straws worked well) or sticks approximately six inches long. The sticks were dropped to create a pile and players had to remove the sticks one by one without moving any other sticks in the pile. If another stick was disturbed, that player's turn was over. Play continued until all sticks were removed. The person who had collected the most sticks at the end of the game was the winner.

Many of the games played over 250 years ago have stood the test of time. In addition to the games above, colonial kids enjoyed playing modern classics such as tag, jump rope, hide and seek and having sack races. No matter what time period they were born in, kids love to play and will find ways to do it. Without a doubt, colonial children's games will continue to be timeless favorites for years to come.