Whether you're teaching volleyball in P.E. or looking for new ways to practice your favorite sport, volleyball games for kids can be fun and educational. Games that include volleyball exercises keep kids engaged and prepare them for playing the game.

Passing, setting, serving, spiking, and blocking are the main skill areas you'll want to focus your games around. Games that resemble simple volleyball drills can make learning the sport more fun for beginners. Consider using unconventional "balls" to help ease players into using hard volleyballs. Each game should focus in on one particular skill.

Teams of two will compete in this simple game to see how many times they can serve before time runs out. If you have a small group and a large space, everyone can play at once. For larger groups and smaller spaces, you may want to time one team at a time. 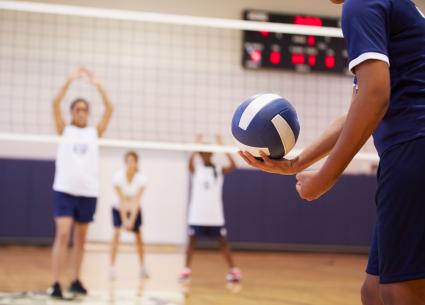 Help kids learn the feel of bumping with a balloon instead of a ball. The slow movement of the balloon also forces players to pay attention and wait for the right moment to bump. You'll need one inflated balloon for each team of two and a long, open space.

Turn the classic kids game of Four Square into a volleyball drill game when you alter game play slightly. You'll need a four square court and one volleyball. Kids will learn to communicate with each other and control the ball.

From warm-up games to boredom busters, some kids may want to practice their skills on their own, outside a group setting. These Minute to Win It style games for kids are either timed or rely on counting to pit a player against herself. You can also use these mini games together as part of an obstacle course or as practice stations with a larger group.

Kids will practice setting and spiking in this timed challenge. The goal is to set and spike as many times as you can in one minute. Since you'll be setting for yourself, a good strategy is to spike as close to straight down as you can to keep the ball close by. 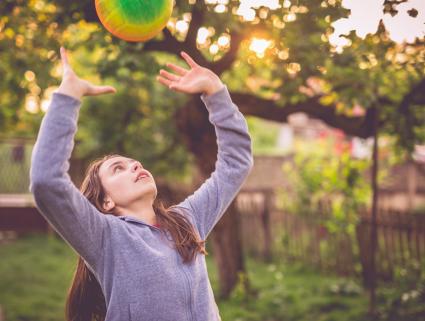 Set it Through the Net

Your outdoor basketball hoop at home can also work as a volleyball practice tool. This game helps you practice accuracy and setting while you race against yourself.

Practice your serve accuracy by creating a target with a bullseye you'll aim at. You can create a bullseye on the ground using various sized hula hoops set inside each other or with jump ropes.

Almost any gym game can be modified into a volleyball game for elementary students or older tweens. You can also invent your own unique games that incorporate important volleyball skills.

Help kids understand how rotations work in a real game of indoor volleyball with a game of Battleship Volleyball. You'll need a volleyball court with a net and a volleyball to play. The object of the game is to knock out as many opposing team battleships as possible. 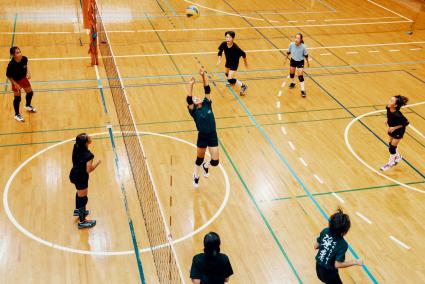 Relay games for kids are great because they require teamwork and can include large numbers of players at once. You'll need a large, open gym and a volleyball for each team to play. Kids will learn how to shuffle their feet for positioning and how to bump the ball.

The gym teacher works with the kids to keep everyone focused and working as a team in this unusual game of tag. Rather than trying to get everyone else out, the goal is to keep all your teammates in. Kids will practice staying focused in the midst of activity, passing the ball, and spiking the ball.

Like most sports, volleyball is featured in several video games for different gaming systems. If you're looking for a way to learn the rules of the game, volleyball video games can be fun and helpful.

Play virtual volleyball using a PC gaming controller with your computer when you buy Spike Volleyball for $40 on Steam. The game is also available for the PS4 and Xbox One. You get to manage your own indoor men's or women's volleyball team as you learn the ins and outs of the game.

If you've got a Nintendo Switch, try your hand at Super Volley Blast. This simple animated volleyball video game is rated E for everyone and only costs about $5. This beach volleyball game can include up to four players at once with custom avatars and a variety of courts.

Wii owners can grab a copy of Big Beach Sports, which includes beach volleyball, for under $20. This is the closest you'll get to actually playing volleyball in a video game since the Wii requires actual physical movement from you.

If you're into the newer VR (virtual reality) gaming scene, you can play Volleyball Fever for about $7. The game is currently in early access mode, but it has decent reviews from users. You can play online or on your own using the Oculus Rift or Oculus Rift S VR system.

Get Your Volley On