It is not unusual for kids to drink coffee or tea on occasion. Kids especially love the popular dessert-like coffee drinks with whipped cream and chocolate and caramel syrups that are so common these days. But it's the caffeine content that's the biggest health concern when it comes to kids.

Potential Dangers of Coffee and Tea for Kids

Coffee and tea contain caffeine, a drug that can be addictive. It is a stimulant, so although moderate consumption by adults is considered safe by FDA standards, it can affect the nervous system, brain and other organs.

Symptoms of Too Much Caffeine 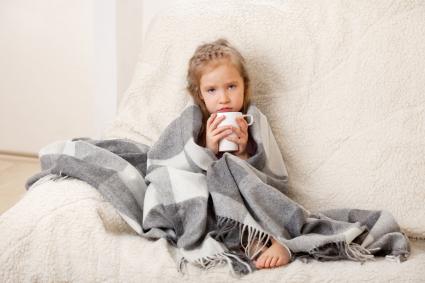 Too much caffeine can cause:

Keep in mind, in younger kids the caffeine symptoms will occur with only a small amount of coffee or tea.

Effects of Extreme Caffeine Use

A higher intake of caffeine can cause more severe symptoms which include:

Kids can also experience caffeine toxicity (overdose) which can lead to seizures and cardiac arrest.

There are no clear-cut answers as to what the appropriate age is that kids can drink coffee or tea.

Caffeine for Kids Over 12 Years Old

Dietary Guidelines for Americans states that three to five cups of coffee which contains approximately 400mg of caffeine is safe for adults. But there are no such guidelines that exist for kids. The American Academy of Pediatrics holds firm on the position that kids under the age of 12 should not have caffeinated drinks. While kids that are 12 and older can drink 85-100mg of caffeine per day which equals about one eight-ounce cup of coffee or tea.

What About Decaf Drinks?

There are most likely no real health concerns for kids (of any age) to have an occasional decaffeinated drink. By comparison, eight ounces of decaffeinated coffee has about 3 mg of caffeine, whereas a 1.6 ounce Hershey bar has 9 mg of caffeine. A 12-ounce can of Coke has 34 mg. So if your child is begging for a mocha Frappuccino, just opt for decaf instead.

If your kids would like to start drinking coffee or tea, it is suggested that the best time for them to start would be at the end of their adolescence at around age 18. This is when growth and development is slowing down. For kids that are tea drinkers, herbal teas that are caffeine-free can be given to kids that are four to ten years of age. Black and green teas should only be given to kids that are over 12 years old. When giving kids caffeinated teas, prepare a weak tea. Diluting the tea is highly recommended. 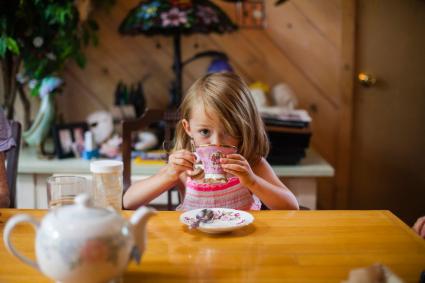 The various caffeine contents are:

Some Positive Aspects of Tea

There are curing properties of tea which include:

Unlike tea, there are no real benefits, positive aspects, or curing properties when kids drink coffee.

In general, the effects of caffeine on kids are negative and not recommended. It is best to avoid giving your kids caffeine or at least monitor their caffeine intake depending on their age. Kids typically have plenty of natural energy to begin with; therefore, adding caffeine would be completely unnecessary.

2
Comments
© 2006-2020 LoveToKnow, Corp., except where otherwise noted. All Rights Reserved.
Is It Bad for Kids to Drink Coffee or Tea?