According to KidsHealth, a typical child has 20 primary, or baby, teeth and will lose them all. Every kid is unique, so the rate and age at which each tooth is lost can vary.

When Teeth Start Falling Out

By the time they reach age three, most kids have their full set of primary teeth. There are 10 teeth in the upper part of the mouth and 10 in the lower part. KidsHealth says these baby teeth start falling out around age five or six.

While each child's teeth fall out at different rates, the American Dental Association (ADA) suggests kids lose about two teeth per year between ages five and twelve. The average number can be more or less per year, depending on the child. Just as some babies' teeth erupt at different ages, some kids' teeth get pushed out later than others.

Why Teeth Fall Out

When children's teeth fall out naturally, it follows typical child development and serves an intrinsic purpose. Dr. Mohamed Abdel Hamid says there are two main reasons people have two sets of teeth. The first is that babies have smaller jaws than adults, which means their mouths simply can't hold the 32 secondary teeth needed later in life. The second reason is babies drink their mother's milk and eat soft foods, so they don't have a great need for big strong teeth to chew different tough textures.

Teeth typically fall out in a similar order during childhood. 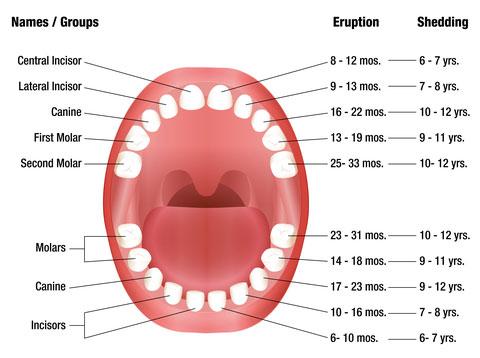 Children's Hospital of Wisconsin shares there is a typical order in which primary teeth fall out; it coincides with the Permanent Tooth Development chart from the ADA.

Although most kids lose their primary teeth by age twelve, adults don't have all 32 of their permanent teeth in place until about age 21 says the ADA. Each baby tooth is pushed out by a permanent tooth erupting, but that only accounts for 20 teeth. After primaries are replaced by secondaries, bicuspids and third molars begin to emerge.

Because tooth development happens at an individual rate, it can be easy for parents and caregivers to worry there might be a problem. Dentists from Boise Family Dental Care share several signs you may want to have checked out by a dentist when your child is at the appropriate age to be losing teeth.

For many kids losing their teeth signifies growing up and maturing. These special occasions are marked with visits from the tooth fairy and trips to the dentist. Knowing what to expect in terms of tooth loss helps parents and kids be prepared for this normal stage of growth.

1
Comments
© 2006-2020 LoveToKnow, Corp., except where otherwise noted. All Rights Reserved.
Resouces, Advice & Tips for Covid-19
Read More
How Many Teeth Do Kids Lose?