Make your preschooler's graduation extra special when with sweet poems that capture the essence of the moment. Whether the poem is whimsical or profound, be sure you select one that is simple enough for young children to understand and relate to. After all, this is their special day.

The following preschool poems are written from different perspectives, and each one is suitable to include in any preschool graduation ceremony.

This poem by Kelly Roper is simple enough that the children could memorize it and recite it at their graduation ceremony.

QRSTUV,
We've also learned manners and how to sit quietly.

WXY and Z,
We're just as proud as we can be!

This poem by Kelly Roper could be from the children to their teacher. One of the parents could print it and frame it as a keepsake with a class photo marked with the year, and the teacher could hang it in the classroom as a memento.

We're going to miss you teacher dear.
You've helped us through this special year.

You've taught us so many important things,
And now it's time to spread our wings.

We're ready now for Kindergarten,
But know that you won't be forgotten.

You'll always have a place in our heart,
Because you gave us such a wonderful start.

This graduation is the first of many,
But one more special? There isn't any! 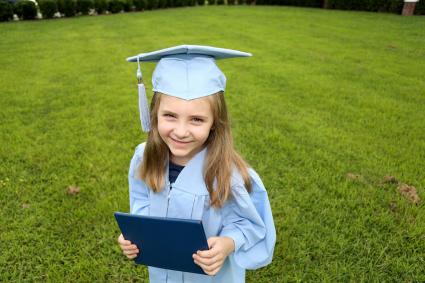 This poem by Kelly Roper would make a nice keepsake for a teacher to pass on to his or her students. The poem could be printed and mounted onto background paper along with each student's individual photo.

Your preschool year is officially complete,
You're a graduate now, isn't that neat?

You've learned so many things throughout the year,
And you're ready for Kindergarten, have no fear.

Your lifetime of learning has only just begun,
Great things are in store for you, and much more fun.

Remember the friends that you made here,
And so many memories filled with cheer.

I can only imagine the wonderful things you'll do,
So congratulations my student, I'm so proud of you!

You're a Preschool Graduate

This is another poem by Kelly Roper that could come from a teacher or a parent and be used for a graduation gift.

Remember back to the first day of preschool,
When you knew no one, and they didn't know you.
You made your first friend, and then made a few more,
And suddenly you had friends by the score.

You listened to stories and learned to sing songs,
You learned how to sit still as the year moved along.
You learned all the shapes and color names,
And letters and numbers, and how to play games.

This Dr. Seuss-inspired poem by Michele Meleen could be used on a keepsake for the teachers at the end of the year. The simple, rhyming verses could also be recited by the kids at their graduation ceremony.

One letter, two letters,
Three numbers, four,
We learned so much and got to explore!

One teacher, two teachers,
Three lessons, four,
We'll miss them all when we move next door!

From pre-K to K,
From there to here,
Goodbye preschool, thanks for a great year!

These short poems are perfect for little ones to recite at their ceremony or adding to mementos.

This poem by Kelly Roper is short and sweet, which makes it a good choice if a group of preschoolers tends to be especially restless. It would be cute to have them memorize the poem and recite it as a group after everyone has received a diploma.

This sweet poem by Michele Meleen is written from the teacher's perspective to the students. The teacher can read it to start or end the graduation ceremony or include it on a personal note to accompany each diploma.

My next level student,
you are a star!
Preschool was only the beginning,
Now off to Kindergarten you are!
But, no matter the grades you pass,
You're in my heart, so you'll never be far.

To Kindergarten We Will Go!

This funny poem by Michele Meleen following the rhythm of "The Farmer in the Dell" is a good choice for kids to recite as they pass from preschool to kindergarten.

Incorporating a Poem Into the Ceremony

Once you've selected the poem you want to use, there are a number of ways to work it into the ceremony. You could read it as an opening to the ceremony, or read it right before or after the official "commencement." In addition to the suggestions that accompany the poems above, you might also:

Preschool graduation songs and poems can be great ways to add meaning to a ceremony without overwhelming the kids.

A Little Something Extra

With all the activity and mild chaos that often accompanies a preschool graduation, a poem might not be what you and your child remember most about the day. Still, it's a nice addition to the ceremony, and it just might become a treasured keepsake from your child's preschool days.