Commonly called pandas or panda bears, the giant panda is a unique and rare animal living in the wild in a small region of China. Because giant pandas were an endangered species from 1990-2016, researchers have learned a lot about these rare bears. Exploring facts about animals helps protect them from becoming endangered.

There are eight different species of bears, including the giant panda. Giant pandas are one-of-a-kind bears unlike any other bear in the world. Basic facts about giant pandas give you an idea of what pandas are all about.

The area where giant pandas live in the wild is much smaller today than it used to be. These bears live in small mountain ranges in Central China among bamboo forests.

Zoo and research experts recognize giant pandas are animals who prefer to live alone. Although mothers do care for their young, once babies are old enough, they go off and live indepently from the family structure.

Giant pandas are easy to recognize because they don't look like any other animal. Pandas have white fur with patches of black fur around their eyes, ears, arms, and legs. There are visible physical differences that set them apart from other animals. 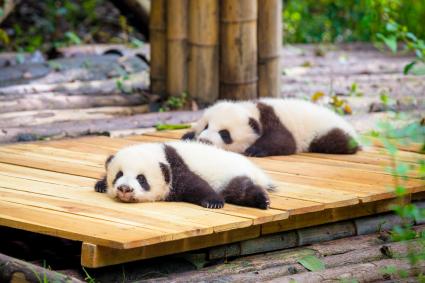 Conservation is about keeping, helping, and protecting wildlife around the world so there is a natural balance of plants, animals and resources. Organizations like Smithsonian's National Zoo and Conservation Biology Institute and the World Wildlife Fund are dedicated to learning more about giant pandas and other animals so they can help keep pandas from going extinct.

Giant pandas are truly unique animals thanks to their distinct looks, but there is one other animal called a panda. The red panda is not a kind of panda bear, but the two animals are distantly related and live in the same habitat. Red pandas are smaller than giant pandas, have reddish fur, and look more like a raccoon. 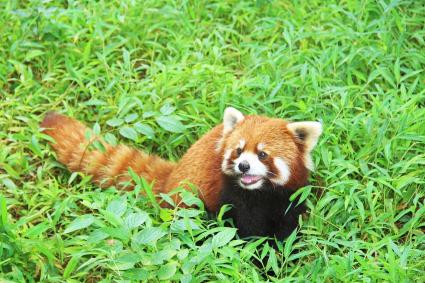 Pandas look cute and cuddly which attracts the attention from children and adults. Take your giant panda education one step further with live videos, more facts, and lesson plans all about these adorable animals.

The giant panda is unique even among other bears. These quiet, slow animals are far from the typical view of bears as dangerous and ferocious creatures. Get to know these interesting animals with fun facts and other resources.