When you think of water and rain, maybe you think about splashing around in puddles or watching it roll down your window. But water can be dangerous if it causes flooding. Learn more about the awesome power of water and floods.

What Is a Flood?

A flood is an area that has an excess of water. The water overflows and goes into areas that are typically dry. For example, too much water in a stream or river can cause it to go over roads and into people's houses. Excess water also causes the rivers to swell and spill over into areas that are typically dry, like the forest or farms. A flood is one of the most common natural disasters. Out of natural disasters that occurred from 1995 to 2015, 43 percent of them were floods.

Floods can be caused by a multitude of different scenarios. These include:

Where Do Floods Occur?

Floods occur all over the world and in almost every place. However, some places are more susceptible to flooding. 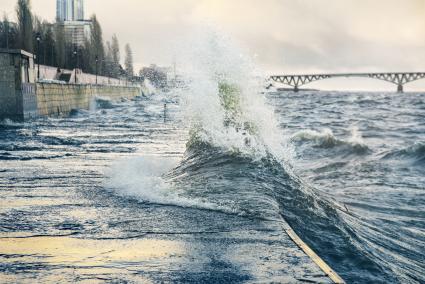 Another area that is a natural flood area is land by the ocean. This is because storms like hurricanes or tsunamis can cause the ocean water to crash into the land creating flood areas.

However, there are specific areas that get more floods than most.

When Do Floods Happen?

Floods can happen at any time. But there are times when floods are more likely to occur. There are not specific flood seasons like there are hurricane or tornado seasons. However, floods typically occur when there is more rainfall. This is typically from the spring to the fall in the United States.

Now check out some interesting facts about floods around the world.

There are several resources out there that can provide facts to kids about floods and how to prepare for them.

The Power of Water

Water is a necessity for life but too much of it can be bad. Water that creates floods can wreak havoc. Not only can it remove roads, but it can destroy crops and wipe out entire houses. While floods can happen at any time, there are some times that floods happen more often. To learn more about storms and water, check out LTK's Tsunami Facts for Kids.